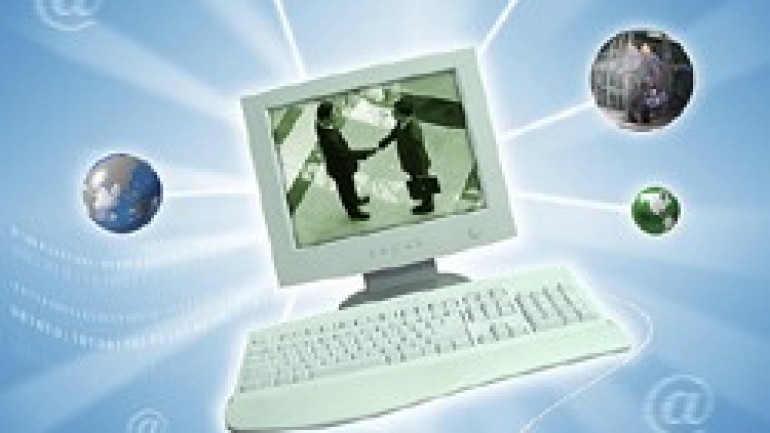 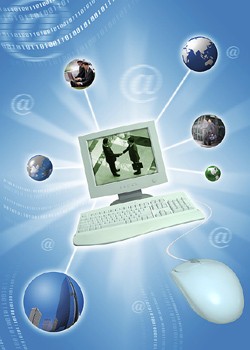 Internet, by definition is a network of networks that interact with each other through exchange of data packets. The Internet hosts an enormous information base and carries numerous information resources and services. Here is a look at the buzzwords of the world of Internet.

Internet Service Provider: A company, which provides users with an access to the Internet, is known as an Internet service provider or Internet access provider. ISP, as it is called, offers email accounts and other services like remote storage of files for its customers.

OSI Model: The Open System Interconnection Model is used to describe a layered communication and network protocol design of a network. It is composed of seven layers, each of which performs certain functions and provides the layers above it with some services. Go through an elaborate description of the OSI model.

Internet Protocol Suite: It is a set of communication protocols, which are used for the Internet. Transmission Control Protocol (TCP) and Internet Protocol (IP) were the two pioneering protocols to be introduced in the Internet protocol standard. The Internet protocol suite is composed of a set of layers wherein; each layer provides a service to the upper layers in the set. The upper layers deal with abstract data while the lower layer protocols translate data into physically transmittable forms.

PPP: Point-to-Point protocol (PPP) is a data link protocol that facilitates the establishment of a direct connection between two nodes on a network. Here is a brief introduction to the Point-to-Point-protocol.

IP Address: It is a way of numerically identifying an entity on a computer network. The original addressing system known as IPv4, used 32 bit addresses. With the growth of the Internet, IPv6 came to be used wherein the addresses are composed of 128 bits. You might want to know how to find your IP address.

MAC Address: Media Access Control address (MAC) is the physical hexadecimal address assigned to each device on a network.

Domain Name System: DNS, as it is called, refers to the hierarchical naming system used for computers, resources and services on the Internet. It translates the computer hostnames to IP addresses. By way of the implementation of DNS, the domain name ‘www.buzzle.com’ translates to its IP address, say, 208.70.178.150. With the help of DNS, domain names can be assigned to Internet users.

WWW: It is a collection of interlinked documents that are accessible over the Internet. It consists of millions of web pages that contain text, images, voice and videos. Sir Tim Berners-Lee, a British scientist working at CERN, created the World Wide Web.

W3C: It is the acronym used for the World Wide Web Consortium, which develops standards for the web community.

Website: A website is a set of web pages consisting of text, audio and video. Web servers host websites.

URL: It specifies the location of a resource on the Internet. It consists of the basic address and path.

Web Page: Web pages are resources of information. They are generally created in the HTML format and provide the web users with navigational abilities through hyperlinks to other web pages on the web.

Home Page: The term home page is used to refer to the page that is the default page of any website. It is the main page of a complex website.

Proxy Server: Client machines on a network connect to the proxy server, which forwards the client requests to other servers and returns responses to the clients.

Web Server: A web server is a computer program that accepts HTTP requests from web clients and provides them with HTTP responses.

Web Browser: A web browser is a software application that facilitates user interaction with the text, audio, video and other information that is located on the web.

Cache: Web browsers maintain a cache of recently visited web pages. Some of them use an external proxy web cache, which is a server program through which web requests pass. This enables the browsers to cache frequently visited pages. Even search engines make available already indexed web pages through their caches.

HTTP: Hypertext Transfer Protocol, abbreviated as HTTP, is a communications protocol used for the transfer of information over the Internet. A client makes an HTTP request using a web browser to which an HTTP response is sent from the server.

Session: It is an exchange of information between a computer and its user. It is established for a certain period of time after which it ends.

Web 2.0: It is used to describe the changes in the www technology and web design. The term deals with the idea of the development of interactivity and connectivity of the web content.

Internet security: It is one of the major concerns today. As the Internet acts as a communication platform that can be accessed by millions of users around the world, it becomes necessary that proper measures be implemented. Issues like Internet safety that deal with the content that is made accessible over the Internet are equally important. Internet privacy relates to safeguarding the privacy of the web users and the sensitive information on the web from hackers and stalkers.

Email: It is a store-and-forward method of writing, sending and receiving written messages. Electronic mail is an Internet e-mail system that uses network-based protocols to exchange messages between network subsystems.

Spamming: The act of sending unsolicited bulk messages over an email system is known as spamming. It is an undesirable use of the electronic messaging systems.

Phishing: It is a fraudulent activity of acquiring the sensitive information by the use of a fake identity during electronic communication. It is implemented by means of emails and instant messages wherein a user is lured to enter his/her details, which are actually captured by a fraudulent website.

Hacking: Hacking is the activity of programmatically gaining access to a computer application that is otherwise inaccessible. The act of gaining an unauthorized access to a computer is known as hacking. Hacking of passwords that leads to breach of email privacy is a threat to communication over the Internet. Internet crime refers to all the criminal activities that are carried over the Internet.

Email Scams: With the increase in the use of email systems, its security needs also rose. Fraudulent users started tampering with the email systems to breach security.

Email Virus: It is a computer code that is transmitted through an email in the form of an attachment. The email attachment causes the destruction of some of the files on the receiver computer’s hard disk and is programmatically emailed to the contacts in the address book of the receiver.

Email Client: It is also known as a mail user agent (MUA). An email client is a front-end computer program or an agent that acts as a client for the email server.

Mail Server: It can also be called Mail Transfer Agent (MTA) and is responsible for receiving incoming email from local users and forwarding outgoing mails for delivery. A mail server application forms the heart of a messaging system that performs all the functions to keep the mails moving over the network.

SMTP: Short for Simple Mail Transfer Protocol, SMTP is the standard for the transmission of electronic mails. The electronic mail server software uses SMTP to send and receive mail messages. ESMTP, that is known as extended or enhanced SMTP refers to the protocol extensions made to SMTP and is widely used today.

POP3: Short for Post Office Protocol, POP3 is an application layer Internet standard protocol. It is used to retrieve mails from a remote server. Here is a brief introduction to POP3.

IMAP: Internet Message Access Protocol, as it is called, is another Internet standard protocol used for retrieval of emails.

Internet Chat: It is a real-time Internet chat or synchronous conferencing that is used for group communication as well as one-to-one communication over the Internet. Jarkko Oikarinen, a Ph.D. from the University of Oulu is the developer of the first Internet chat network. He developed the client and server programs for Internet Relay Chat in August 1988.

Dial-up: It is the means to connect to the Internet using the copper phone lines and a modem. Dial-up connections are capable of sending information from the client’s end at very slow speeds of about 56kbps.

Communication Bandwidth: It refers to the data that can be transferred between two points in a given period of time. It is expressed in terms of bits per second. It is commonly known as the bit rate.

Blogs: Blogs are the expressions of the common masses about social or political issues or simply anything. Blogs can often be in the form of creative write-ups by writers in different parts of the world.

Internet Forums: It is a bulletin board that serves as a platform for group discussion. Registered users are free to contribute to the issues raised in forums thus making them open discussion platforms.

Usenet: Usenet can be considered as a worldwide bulletin board. Usenet newsgroups serve as a repository of messages posted from users around the world.

Internet Search Engine: It is an information retrieval system that is designed to help find information over the Internet. Search engines use algorithms to scan the huge information base of the Internet and sort it making it retrievable for the web users.

Web Crawler: Popularly known as a spider, a web crawler is a program that browses the World Wide Web in an automated manner. Search engines use the crawling technologies to index pages on the web.

Internet Bookmark: The Internet browsers of the modern times aim at enabling the users to organize the web pages they access. Links once visited can be saved in the favorites or preferences categories. Bookmarks are usually integrated into browsers. Social bookmarking is a method used by Internet users to store and manage web pages.

Web Directories: It is a directory, which links to other websites and organizes those links. They should not be mistaken as being search engines.

Router: A router connects two or more logical subnets and performs the functions of routing and forwarding information.

Intranet: It is a relatively smaller private network that uses the Internet protocols and connectivity. It is an extension of the Internet and is privately used by organizations.

Extranet: It is a private network that uses Internet technology to share a part of the business information and operations with suppliers and customers. It can be a part of a company’s intranet that provides access to the users outside the company.

Virtual Private Network: It is a private network that allows the exchange of information between computers over a shared or a public network.

Wireless Networking: It refers to computer networking that is carried out over the wireless media.

Broadband Internet: Broadband connectivity to the Internet provides the users with a high-speed Internet access.

Dial-up Internet: In this type of access to the Internet, the user’s computer is attached to a modem connected to a telephone line. Dial-up Internet access involves a modem that dials into an Internet service provider to establish a connection.

Copypasta: If text is copy pasted from somewhere and posted in a forum, it is termed as a copypasta. The source is often unknown in such cases.

Egosurfer: The web users who search over the Internet for themselves fall under the class of egosurfers. I am sure most of you play an egosurfer once in a while.

Trasher: The users who search over the Internet using all possible means, sometimes even risking the Internet security are known as trashers.

Troll: Trolls are the users who try to become infamous on chat by introducing disturbing links, mimicking other users’ posts and profiles and fighting with others.

Youtuber: A person who is addicted to watching videos on the Internet is referred to as a youtuber.