How Does the Internet Work 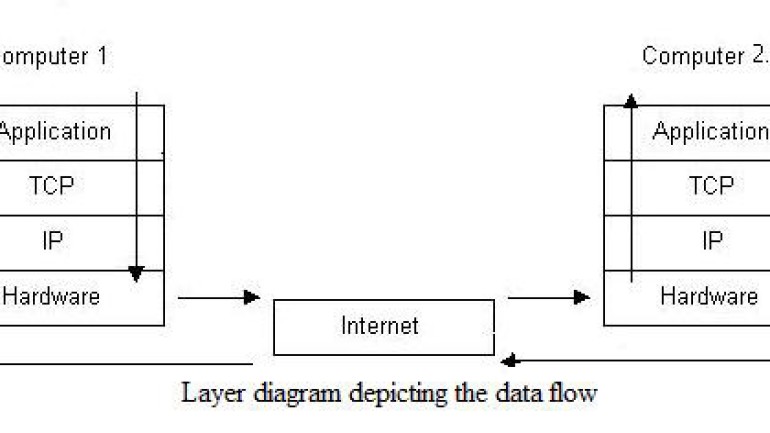 When posed with such a question, most of us think that we own a computer, we have a telephone line or a satellite TV cable, and a modem; that’s all there is to know about how the Internet works. But, this answer sums up only a small percent of the whole story.

The Working of Internet

Working of the Internet is based on a series of protocols. A protocol is a set of rules or a kind of agreement, wherein two parties agree to abide by a set of rules. In this case, these rules govern the transmission and reception of data, to and from a computer from a party and situated at some unknown location.

To know how protocols work, it’s important to understand the protocol layers. The network is firstly divided into various layers and protocols that are set for each of these layers. Let’s see what the protocols are, layer wise:

Transmission Control Protocol (TCP) Layer
Every application requiring network access communicates with the TCP layer first. This protocol has a set of rules that govern the functioning of the transmission layer, which is between the application layer and the IP layer. While receiving data, TCP directs data to a specific application using the port number.

Hardware Layer
This is the layer which physically connects a computer to the data transmission media which may be a phone line, a cellular or a satellite connection. This layer includes modems, ethernet cards and hardware lines which materialize the actual connection process. The protocol governing this layer converts computer readable digital binary data into transmittable analog data (this is not needed, in case an ethernet line is used).

To demonstrate how data flow occurs through these layers when using the Internet, let’s consider the case of two computers, where computer 1 is trying to access some data on computer 2. Let’s say that user1 and user2, are the respective users. User 1 is using an application, let’s say some browser. Thus, he directly communicates with the application layer only. His actions are relayed through by application layer to the TCP layer. The TCP layer communicates with the IP layer and the IP layer, then corresponds to the hardware. All this while, the respective protocols take care that these layers function the proper way. Now, the data or the request from user1 is sent to computer 2, via the Internet framework. This is when the importance of protocol is evident. All protocols on the receiver’s end function for the opposite cause. We better not go too deep into the working of protocols, as that is not what we’re looking for.

Till now, we were concentrating a lot on the Internet in the wired world. But, with technologies like Wi-Fi and WiMax giving the cable a run for its money, it’s time to throw some light on wireless Internet.

The Working of Wireless Internet

Before answering this question, let’s find out about the type of wireless Internet connections. They are of two types: a wireless connection using a router, more commonly known as Wi-Fi, and the Internet accessed through a mobile phone network. Now, let’s know the working of wireless Internet, via Wi-Fi and on mobile.

Wi-Fi
A Wi-Fi capability is achieved by simply making your normal wired connection wire-free. This is done with the help of a router. A router, as the name suggests, is simply a re-routing device. It is equipped with a low-power radio transmitter and receiver, with a range of about 300 ft. It is connected to the normal wired media like a phone line, satellite TV line or the ethernet cables. The router converts the received electrical signals into radio signals capable of being transmitted through the air. While sending the data on the Internet, it does the exact opposite, i.e converting radio signals into electrical signals. For Wi-Fi compatibility, you need to have computers equipped with wireless cards, which is nothing but a radio transmitter and receiver. Wi-Fi is technically termed as IEEE 802.11 and has quickly evolved to newer versions like 802.11a, 802.11b, 802.11g, and 802.11n being the latest. As a router creates a Wi-Fi hotspot of about 300m radius, Internet can be accessed in those hotspot areas only.

Mobile Internet
If you own a relatively new mobile handset, then it’s most likely to be equipped with a built-in web browser. Mobile phones with internet capabilities are based on a system called WAP (Wireless Application Protocols). Those areas, where GSM (Global System for Mobile) phones are in use, General Packet Radio Service (GPRS) is available to the users to access the Internet in 2G and 3G systems. A 2G system offering GPRS service is often called 2.5G. A typical 2G GPRS system provides a speed of 56-128 kbps. This system works on converting data packets into radio packets using an in-built WAP modem. This method of data transmission is known as packet switching. Packet switching is more beneficial, as compared to circuit switching used in voice transmission over cellular networks. Here, the cell phone connects to the same wireless connection used to make calls, but instead of getting re-routed to another cell phone, it connects to a web server. Web content from this web server is downloaded to your Internet phone and the modem demodulates the data to be viewed by the browser.

Internet on CDMA (Code Division Multiple Access) phones uses a similar mechanism over a different technology. It has a much faster speed, as compared to the GSM-based Internet services.

Protocols and layers similar to those used in computers control all these operations. Now, you have a fair idea of how Internet works in mobile phones.

I hope your query has been answered. Now, that you have a fair idea of Internet’s working, you can closely associate yourself with the World Wide Web.
, How Does the Internet Work blog.enghost.org farkıyla sizlerle.