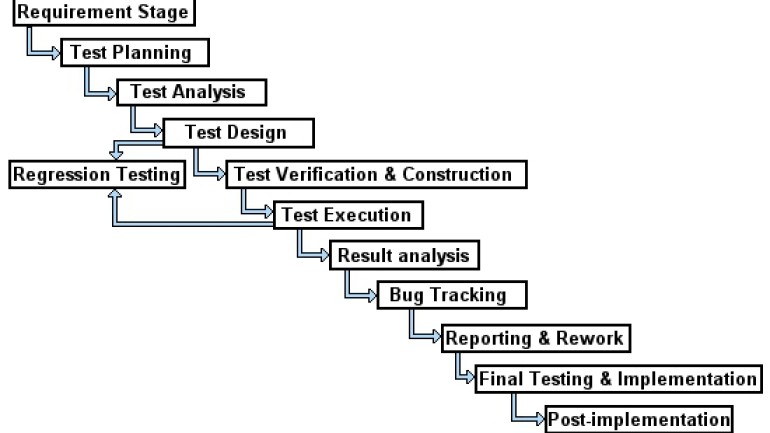 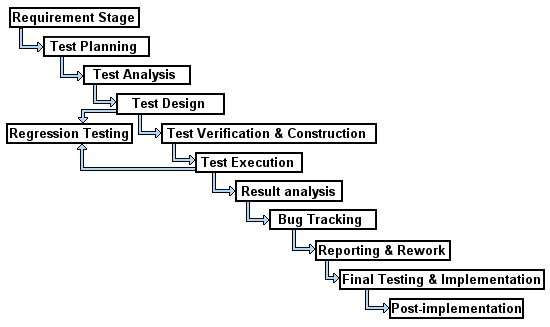 What is Manual Testing?
Manual testing is the method used to check a software for defects manually. In this type of testing, a tester wears garbs of an end-user. All features of a software are tested to know, if the behavior of the software is exactly according to the expectations of the customer. Normally, the tester has a test plan, which he uses. Other than test plan, there are test cases written, which are used for implementing the test plan.

Manual Testing Guide
After the introduction to software testing, we will now turn towards software testing tutorial. This tutorial deals with almost basics of manual testing.

Stages of Manual Testing
The entire process of manual testing goes through four phases. First phase is known as unit testing. It is the job of the developer to test units of the code written by the developer himself. In some cases, the code may also be tested by a peer. Integration testing is second phase of software testing. It is carried out, when big chunks of codes are integrated to form a bigger block. Either black box or white box testing is carried out in this phase. The next phase is system testing phase. The software is tested for all possibilities to rule out any kind of abnormality in the system. Normally black box testing technique is used in system testing phase. User acceptance testing is per se the last stage of manual testing. In this phase, software is tested keeping the end-user in mind. There are two types of acceptance testing which are used, namely alpha testing and beta testing.

There are other types of software testing, which are used to test a product to ensure that the software meets requirements of the end-user. They include:

Bug Life Cycle
The aim of entire software testing activity is to find defects in the software, before it is released to the end-user for use. Bug life cycles starts after a tester logs a bug. Phases in the bug life cycle are:

Software Testing Models
There are different software testing models, which the software testing team can choose from. Each of these models have different methods, as they are based on different principles. A number of factors are taken into consideration, before a particular model is chosen. The different models that are used are:

Manual Testing FAQ’s
1. Validation vs. Verification
Verification answers the question, Am I building the product right, while validation answers the question, Am I building the right product. To explain it further, verification is carried out at the end of every phase to ensure that the software has been developed in accordance with the conditions set up at the beginning of the said phase. On the other hand, validation is carried throughout the software development life cycle, to ensure that all the requirements are satisfied.

4. Explain boundary value analysis in brief.
It is an integral part of black box testing, where tests are carried out using values on the boundary. It can either be a maximum value or a minimum value permitted for that input or output. It helps in analyzing, if the system performs in the desired manner for both ends of the spectrum.

5. Differentiate between Usability and Functional testing.
In usability testing, application is tested to find, if there are errors pertaining to functioning of the software. For example, if software gives erroneous messages, which can confuse the user is a part of usability testing. Functional testing is carried out to find, if the software performs an action it is not supposed to. A classic example can be when the software accepts an erroneous username and/or password and logs into the system.

6. What is a Test Strategy?
This is a document, which is used to define the test approach for a particular software. It is decided using system requirement specification document. In the initial phase, test plan is drawn using this document, however, since the document is not updated at regular interval, it may not prove to be useful in case there is a change in system requirement specification.

7. Explain in short a ‘test case’
It is in a test case, that desired behavior of the software is described. It includes input, expected output along with the action as well as the actual output. Different parameters, which are essentially a part of a test case are test case objective, test conditions, input data, test case name, etc. Test cases are normally prepared at the beginning of the development cycle to ascertain that requirements specification document does not have a problem.

8. Explain: a test suite
Several test cases put together is known as test suite. Often a test suite is designed for every component of software under test. Post condition of the first test case becomes the precondition of subsequent test case.

9. Differentiate between Load and Volume Testing.
As the name suggests, load testing checks whether the system works as it is supposed to work, when load on the system increases. Increased load can either be due to increase in number of users at the same time or it can be due to numerous transactions taking place on the system simultaneously.