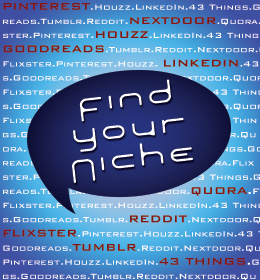 Social Networking Sites in Niche Areas
You would be amazed to find that there are quite a few niche-centric sites operating on the Internet. For those who are interested in finding that special zone to socialize, the list given below should be of help.

Images are for representative purposes only

• Some of the popular categories on the site are travel, films, food, fashion, art, and cars.

• The activity of ‘pinning’ on pinboards is displayed in a chronological order in the form of ‘pin feeds’.

• Pinterest encourages businesses to market their services and products by allowing them to create pages.

• Tumblr allows users/bloggers to make their blogs private. Users can also change the appearance of their blogs through HTML coding.

• Tumblr users can re-post content from blogs they have subscribed to, by means of re-blogging.

► Co-founders: Alexis Ohanian and Steve Huffman► San Francisco, CA, USA
• Reddit is based on the concept of ‘bulletin board system’. Registered users of this site are allowed to submit links and text.

• Users of the site can ‘vote’ on the submissions of fellow users. Votes of users determine the rank of the submission. Members are awarded points (known as ‘karma’) for their links (that get voted up) and high-rated comments.

• The site helps in grouping submissions into categories called the ‘reddits’.

► Founder: Otis Chandler► San Francisco and Santa Monica, CA, USA
• Goodreads has got a huge database of books, book reviews, and annotations. The data found on the site is generated by users. Members are given free access to this data.

• Apart from reviewing and rating books, users can create their personalized book shelves on Goodreads.

► Co-founders: Adam D’Angelo and Charlie Cheever► Mountain View, CA, USA
• Quora is basically a question-and-answer site, where people ask questions and get answers from the members of the site.

• Although Quora is a question-answer site, it is not limited only to asking and answering questions. Users can use this social network to simply share their thoughts on different topics.

• One has to register on Quora with their real name and not any random screen name.

► Co-founders: Joe Greenstein and Saran Chari► San Francisco, USA
• This is a social networking site where movie enthusiasts can interact with each other.

• Users get varied information on movies, right from movie timings to reviews. At Flixster, one can also view trailers of upcoming movies.

• Flixter’s app called ‘Movies’ has been quite popular among Facebook users. Flixster has more than 50 million registered users.

• As of January 2013, the site has registered more than 200 million active users. LinkedIn has presence in 200 countries. It is available in 17 languages, including English.

• Users can create a detailed professional profile on this site. The search and filter options offered by LinkedIn are amongst the best in the industry – which allow users to carry out thorough research.

• Users of Houzz can share photos of the interior and exterior of their homes. Houzz users can benefit from articles written by experts from the field of home improvement.

• By the end of October 2012, the Houzz database had accumulated over a million photos, and more than 4.7 million ‘ideabooks’ that were created by users.

• Unlike other social networks, where the member count goes on increasing, the number of Nextdoor users in a particular group is restricted to a certain number.

• In the past, doubts pertaining to people using the network to shame their neighbors in public were raised. However, the company’s management has played down these doubts. Nextdoor management has claimed that since real names are displayed on the site, one would think twice before making snide remarks on their neighbors.

► Co-founders: Daniel Spils, Erik Benson, and Josh Petersen► Seattle, WA, USA
• Users of this social networking site are provided a platform to list down their goals and share them with other users of the site. The site is called ’43 Things’ because its users can list up to 43 goals.

• Parsing of goals by the lexer helps users connect with other users having same or similar goals.

• The activity of listing down your goals should motivate you to pursue them with passion and urgency. Also, by stating your goals clearly, you remain focused on them. This is the main reason why 43 Things is one popular niche-centric site.

Others
Here are a few more sites that you might find interesting:

Niche-centric social networking sites not only help connect lay Internet users with each other, but also provides businesses with a ready-made platform to find their audience. Thus, niche-centric sites hold the potential to grow and are here to stay for a long time.