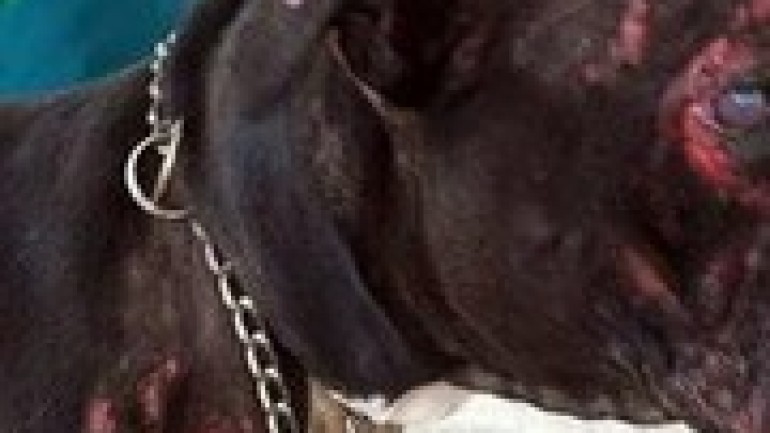 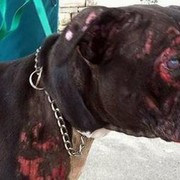 A heroic pit bull alerted a Florida family to a house fire last week and paid the price for his bravery, reports MSN Now on Sept. 29.While barking his warning, the 9-month-old dog caught fire and suffered burns over a third of his body. The family, faced with severely mounting medical bills for their beloved pet, were confronted with a tough choice – Could they afford to treat “Onyx,” or would they have to give him up?At around 2:00 a.m. last week Thursday, Trevor Myres, Sierra Plair and their two sons awoke to Onyx barking and yelping that their Tallahassee, Fla. home was on fire. Making their way safely out of the house, they saw that Onyx was on fire.The family dog evidently stayed close enough to the flames in order to keep his barking audible and kept it up until he saw the family was safe. Trevor used a garden hose to extinguish the flames, but Onyx suffered third-degree burns over much of his body.“I honestly do feel like if Onyx wasn’t out there, even though it’s unfortunate, anything could have happened,” Plair said. “Once the fire got up to my son’s room, we wouldn’t have been able to go up there and get the kids out.”The Tallahassee Animal Service Center had been caring for Onyx, but with vet bills looking to skyrocket for the needed care, the family was afraid they would have to either go into debt, or give up their hero pet.“We were at our wits end,” Plair said. “We were going to give him up because we didn’t have money for treatment.”Employees at the animal shelter who were touched by the story reached out to veterinarian Kevin Brumfield, who used the Facebook page at Northwood Animal Hospital to launch a campaign, which has now raised money to treat Onyx.The couple could barely hold back tears as they visited their much-loved pit bull in the hospital this past Friday. “I’m just so happy that he’s getting the treatment that he needs and that he deserves,” Plair said.Related Story: Puppy Doe: Tortured and murdered, young puppy’s death is a call for justice